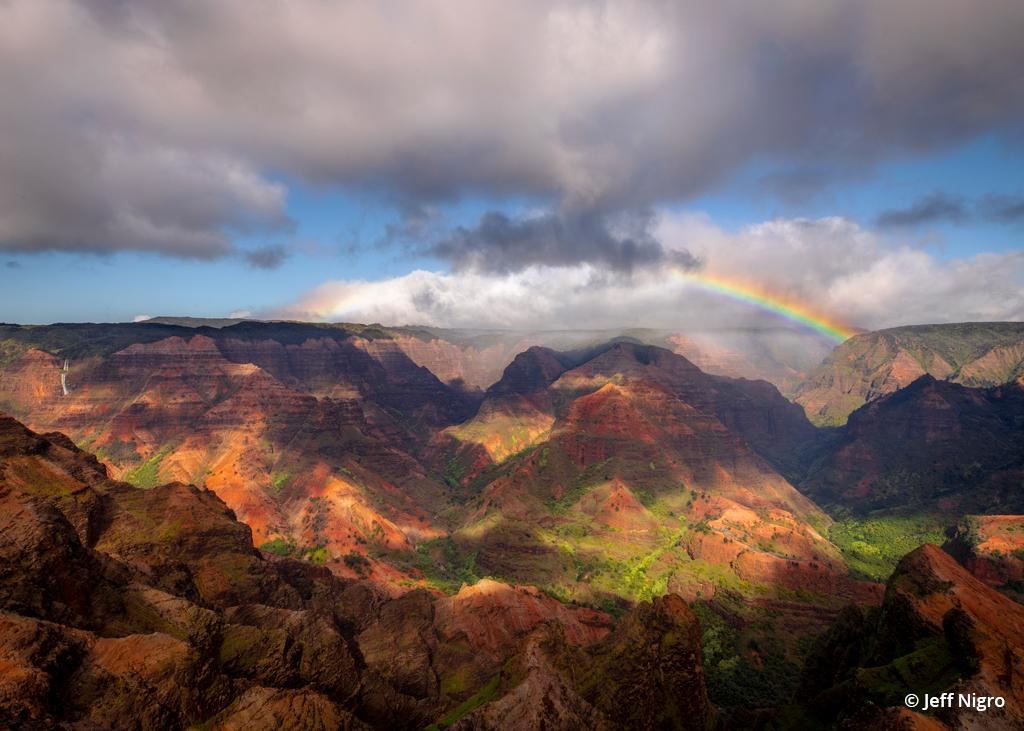 Nicknamed “The Grand Canyon of the Pacific” due to its multi-colored canyon walls etched deeply into the terrain, Waimea Canyon on the south shore of the “Garden Island” of Kauai was formed when the Waimea River carved its way through the lava and basalt formations of the region. Waimea is Hawaiian for “reddish water.” Driving through the canyon takes you through both Waimea Canyon and Koke’e State Parks. Throughout the canyon, there are hiking trails where you can see tropical foliage, green and red scenery, waterfalls and rainbows.

The park’s location on the south side of the island means that it doesn’t get nearly as much rain as the north and east sides, and due to its elevation, the average temperatures are lower than the rest of the island. Elevation at the first lookout is about 3,400 feet. Average high temperatures range between 61 to 68 degrees Fahrenheit during the year, which is about 20 degrees cooler than the nearby town of Waimea. It will generally rain between nine and 12 days per month throughout the year, but the rain doesn’t last long and creates wonderful conditions.

From the town of Waimea, State Route 550 winds about 18 miles through the canyon, offering several lookouts. This shot was taken from the popular Waimea Canyon Lookout, and continuing along the highway, you’ll encounter other lookouts. From the Pu’u Ka Pele Lookout, the 800-foot Waipo’o Falls are visible after a heavy rain, and the Pu’u Hinahina Lookout offers a view of the nearby island of Ni’ihau. Further up the highway is the spectacular Kalalau Lookout, which has stunning views of the Na Pali Coast.

If you travel to the end of the highway, you’ll be treated to one of the most breathtaking views in all of Hawaii at the Pu’u o Kila Lookout. There, the jagged green cliffs of the Na Pali Coast contrast with the red soil as you gaze out toward the impossibly blue waters of the Pacific Ocean. If it’s cloudy when you go, wait around a while for the clouds to disappear.

If you’re interested in getting away from the crowds, there are many trails throughout the park that offer exceptional photographic opportunities. The late-afternoon sun provides the best light for photography since the canyon walls will catch the light, and the reds and greens will glow. If there has been recent rain and there’s still moisture in the sky, you may even catch a rainbow. Sunrise can be special here as well.

Because it’s Hawaii, there’s no bad time of year to visit. The summer and winter months tend to be more crowded, but don’t let that stop you. Winter means that the days are shorter, and the temperatures will be only a few degrees cooler. It’s always a good idea to have a light jacket when visiting Waimea Canyon.