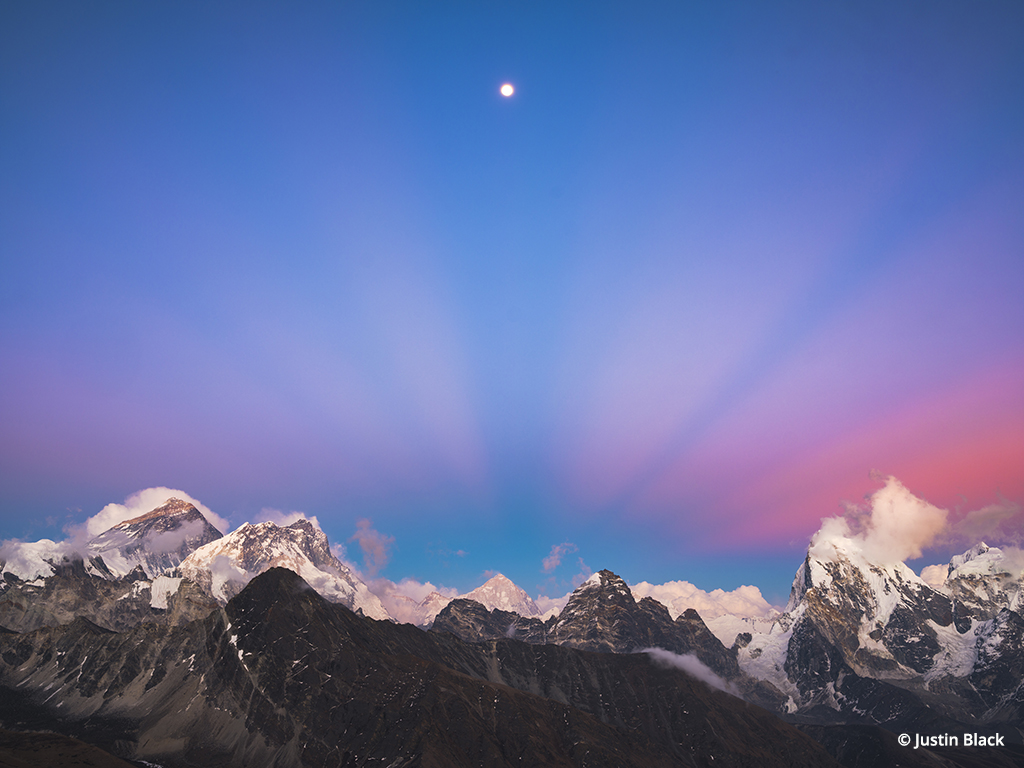 This photograph was 23 years in the making. It was inspired by a powerful series of photographs that archetypal mountain photographer Galen Rowell made from the summit of a minor peak in Nepal’s Everest region and published in his May 1999 column for Outdoor Photographer. I went to work for Galen that same month, and I swore to him that someday I would experience that sublime vista with my own eyes.

August 11 of this year marks 20 years since the plane crash that prematurely snuffed out the brilliant flame that Galen and his partner in life, Barbara Cushman Rowell, represented, so it was time to get busy keeping my word as a tribute to my late mentor and friend. In April, I led a Visionary Wild trekking expedition into Nepal’s Khumbu Himal, the home of the Sherpa people and four of the six highest peaks on Earth, including the highest, Mount Everest, at 29,032 feet. This is a place that is considered by many in the region to be Heaven on Earth—literally—with various Hindu and Buddhist deities residing among the peaks. Some, like Chomolungma (“Mother Goddess of the World,” what we know as Mount Everest) and the iconic peak Ama Dablam, are considered gods in their own right.

Our ultimate goal was to reach the summit of Gokyo Ri, a lesser peak topping out at only 17,575 feet, in time to catch the nearly full moon rising at sunset over Everest, Nuptse, Lhotse, Makalu and Cholatse, as Galen had done in spring of 1998. To increase our chances of good conditions for the ascent and photography of the peaks and moon on at least one evening, our itinerary included a three-night stay leading up to the full moon at a lodge in the village of Gokyo on the shore of the turquoise lake Dudh Pokhari. Being shut down by clouds or storms was a distinct possibility, and we didn’t come all that way to fail.

The first night at Gokyo, our group needed to rest and further acclimate to the elevation, so our first attempt began on our second afternoon. After a two-hour, 2,000-foot ascent, we arrived on the summit about two hours before sunset. In that rarified air, as the sun descended toward the horizon at my back and countless Buddhist prayer flags fluttered in the breeze all around, I truly felt as though I was standing on the roof of the world.

After the last direct orange rays of sunlight left the summit of Everest, we were treated to this glorious lightshow as the Earth’s shadow rose and crepuscular rays penetrated the stratosphere. This exposure was my favorite of the evening.

As the color faded, we switched on our headlamps and began the hour-long descent back to our lodge in the dark. In the chill night air, our hearts and minds were ablaze, and I felt as though I’d had the opportunity to visit with Galen for a while. I wish I could say that the scene looked the same as it had back in 1998 when he was there, but a lot has changed in 24 years. As one would expect, comparison of images from 1998 and 2022 shows significant glacial deflation and retreat, mostly below 20,000 feet.

On our final day at Gokyo, I had planned to do a second ascent to take advantage of the fact that the moon would be a bit lower in the sky at sunset, but afternoon clouds gradually socked in the summit of Gokyo Ri, obscuring the view of the mountains. Our plan had done the trick, and as Galen used to say, we were “prepared to receive luck.”